So today we decided to try a little something different. We used our laser engraver to burn the famous Gadsden artwork onto a Kershaw Leek. The first one we tried didn’t go so well because it was too light. The second one looked great though because we slowed down the laser. (The hard 410 stainless steel handle on the Kershaw Leek takes some serious laser power to make a mark on it.) Once we burned it nice and slow we had quite a nice looking knife, at least we think so!

The coiled rattle snake with the phrase, “Don’t Tread On Me”, dates back to the days of early America when Great Britain often sent criminals to the USA instead of housing them in their own penal system. One newspaper published this Gadsden rattlesnake artwork and suggested that maybe we should send Great Britain a box of rattlesnakes to show our appreciation for the criminals! The rattlesnake was a common creature of all 13 colonies at the time, by the way. Since then the Gadsden artwork has been put on a flag and resurfaces often during displays by patriotic Americans.

So here it is, I hope you like it. We are thinking about making a whole engraved series of Kershaw Leeks like this that features famous artwork and pieces of American Heritage. 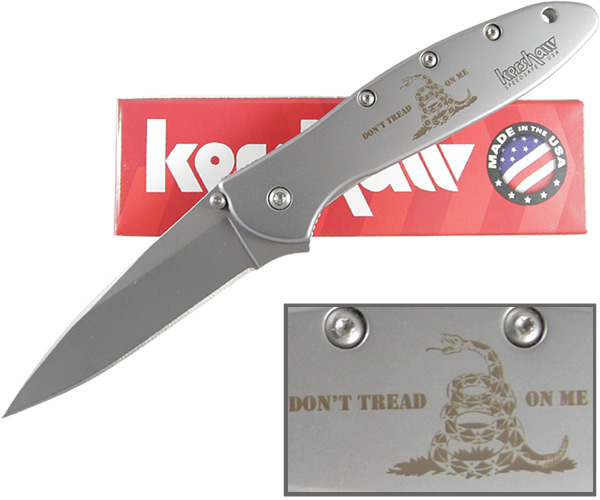 get social with us!